The Wellstead Cricket Club was Incorporated in 1969. The club is an inclusive family friendly hub of the community providing dinners and entertainment throughout the cricket season. The Green Range Cricket Association commences games in January after the busy agricultural period of harvest. In 2019, the club proudly celebrates 50 years of existence. 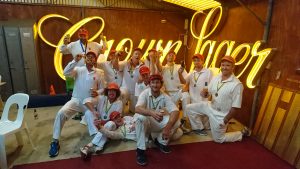 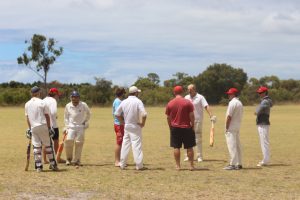 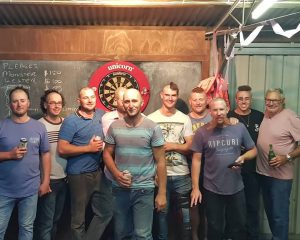 The following is an excerpt from “Wellstead- The Story of a District” published by the Wellstead Historical Committee in 1988:

The Wellstead cricket pitch was laid in 1965.

Mixing was carried out under the watchful eye of the late Harry Kuch (Kuch Road is named after him) and local cricketing experts- Norm Shearer, Alan Barr and Athol Large.
The first social game was played in 1966 against Gnowellen. Wellstead ran out easy winners.
During one of these early games, local Demon bowler, Bill Fenwick, took the first hat trick on the Wellstead pitch (bowling a slow ball to a very young Peter Moir- the ball bounced three times before Peter missed it completely and was bowled!!). Bill promptly “hung up his boots” as he reckoned it had always been his intention to “go out while on top”.

In October 1969, we joined the Ongerup Association and played the first game at Wellstead- Wellstead vs. Borden- to see Wellstead capitulate dismally, overawed I think, at the thought of playing in the big league!
The next game was at Pingrup, where we held on to win. Celebrations continued till late at the “local”, where we had a meal before returning home. At one time during the evening, Andy Mitchell, probably suffering from too much lemonade, announced that “when wool gets back to the equivalent of a pound, a pound I will pit in a turf wicket at Wellstead!” Bill Watson, not to be outdone, stated that under those circumstances, he would build a grandstand at Wellstead!
During one of the games at Wellstead against Borden, Bob Millard hit a six off of Richard Sounness out of the ground and onto the Hassle Highway road verge. The ball was declared lost and after the game, the Borden captain suggested that Millard pay for the new ball! Fiction has it that dust was seen to rise from a grain truck that was passing and the ball was later found to have blocked the elevator screen at C.B.H. Albany.

We made the Grand Final that first year, but lost to Borden in a very high scoring game that went for four days.
1972 saw Wellstead win their first Grand Final by defeating Ongerup- great were the celebrations! The wind-up was held at Wellstead under canvas (because of rain) and the epic saga of Bill O’Meara’s “red heifer” took place at this time.

In January 1977, during Country Week Cricket in Perth, the temperature was 114F (45.5 deg. Celsius) in the shade, Robert Fenwick with an exceptional bowling spell, took 10 wickets for a 36 in a match against Bunbury no. 2.
1978 saw Wellstead once again playing in the grand final, but this time losing to Ongerup in a match full of incidents.

In the 1980-81 season, the Wellstead Cricket Club left the Ongerup association and applied to join the Green Range and Districts Cricket Association. Skippered by Ray Barr and with newly returned Warren Mitchell, the club won the 1980-81 grand final against Manypeaks by two wickets.

For the 1981-82 season, the ranks were further bolstered with Leigh Row joining the club and being elected captain. Wellstead made the grand final but this time were runners-up to Green Range.
The 1982-83 season was our last season of success, with Leith leading the team to victory against South Stirling. The game was highlighted by an unlucky 99 not out to Morgan Sounness in the first innings and a century to Leith in his second innings.